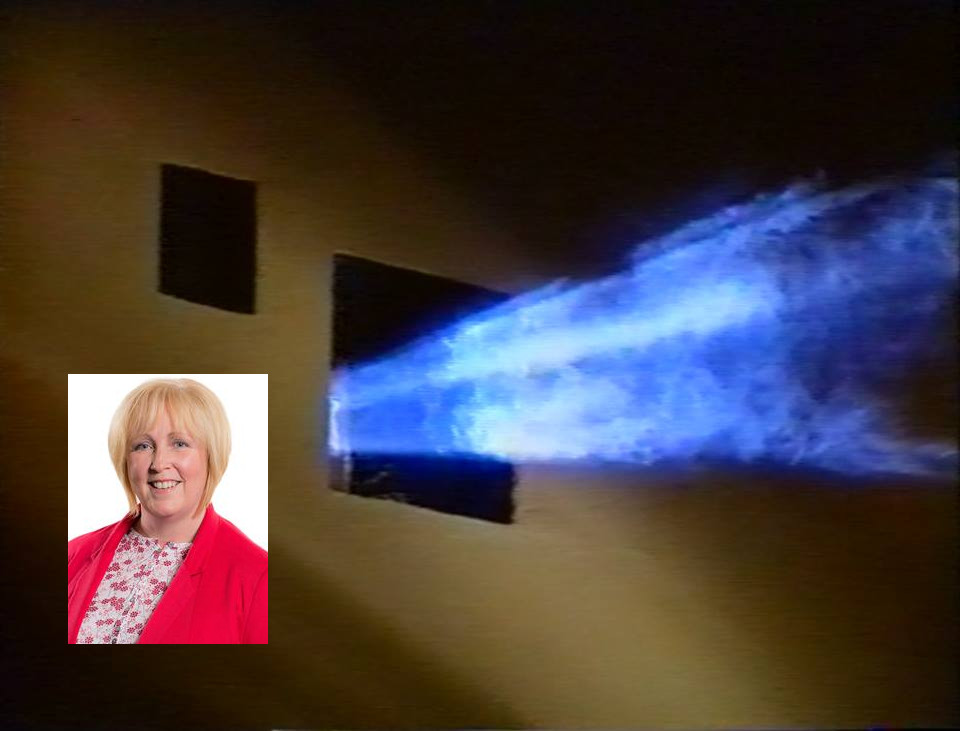 The hall, which still operates as a members’ licensed club, appointed new trustees last December and they are working hard to get funding so that urgent repairs can be carried out. Longer term, they have ambitious plans to see the entire building brought back into community use.

Suzy, who is a Welsh Conservative Regional AM, visited the hall at the invitation of the trustees. She was shown around by secretary Robert Sims, volunteer Angie Keane and Robert’s mother Diane who has been involved with the building for many years.

The hall itself is a charity but its trading arm which runs the club is a limited company. Diane explained that they have found the old minute books which show that moves to build the hall date back to 1924 although it was 1929 before it opened as a single storey building.

The top storey was added in the 1930’s and included a large auditorium with a sprung dance floor and a balcony. This was converted into a cinema in the 1960’s.

The building was supported by the contributions of miners working in the private mines in the area but this money began to dry up from the 1980’s onwards. The cinema closed and the top floor was shut off because of fire regulations and it has not been in use for about 20 years.

The trustee board was re-organised to bring in new, young blood and they have also recruited volunteers like Angie to help with the massive task they face.

They are actively seeking funding at the moment to pay for things like feasibility studies, business plans and building surveys.  They have approached the local windfarms which provide community funding and are also hoping for support from Big Lottery, Coalfields Regeneration Trust and CISWO plus the Welsh Government’s  Community Fund.

Robert said that their vision was to create a multi purpose hall upstairs which could be used initially as a theatre and also performance space plus providing room for local dance groups and other organisations. They may reinstate a cinema at a later date but the fixed seating would be removed to give more flexibility. They are also exploring the possibility of putting in a rock-climbing wall.

They also want to build an extension on the ground floor to create a café and a tourist drop in centre.

Diane explained: “There is no café in Resolven and local people would love to have somewhere to meet their friends and where people in the community can interact.

“We also have a lot walkers visiting the valley – there are a number of walks that are being promoted here but there are no facilities at all. Walkers would be able to use the café to buy refreshments and we would also like to have tourism information available  to help people keen to explore the Neath Valley.”

The building already offers a bar, lounge and snooker hall and there would also be smaller rooms that local groups could hire.

An initial survey has revealed that £38,000 is needed immediately to carry out urgent repairs to the roof and window lintels but the building is structurally sound.

Suzy said: “I am giving this group my full backing and will be supporting all of their bids for funding. They have shown vision and imagination in what they are proposing but it’s very well grounded. There is nothing pie in the sky about their plans. They have a realistic view of what’s going to be possible and also what is needed.

“Resolven seems to be undergoing a revival with the successful carnival that it organises and the Christmas fayre – these events attract thousands of people. They have proved that Resolven has the community spirit necessary to see this scheme through.

“They have already made this hall a focal point for the village once again with spin off groups like a ukelele band and a young performers group  based there.”

Following our Full Building Survey it was noted that the roof of the building...